We are pleased to be offering the Robert Osborne personal collection of movie memorabilia. Mr. Osborne’s passion, dedication and knowledge of motion pictures shines brightly in this collection of over 10,000 items. With memorabilia spanning from the 1930’s to date are collections of movie posters in all sizes—including one rare "never-used" Pride of the Yankees poster—lobby cards, autographed photographs, autographed letters, awards, publicity photos, still photos, wire photos, fine art photos, campaign books, press kits, early motion picture magazines and more.

This sale is highlighted by Richard Day’s 1936 Academy Award Oscar® statuette for Art Direction of The Dark Angel. Rivaling the Oscar® statuette is Mr. Osborne’s personal copy of the 1979 book he authored, with a special presentation page: "Personal Copy for Robert Osborne". His passion, enthusiasm and appreciation of film and its stars is shown in this one-of-a-kind book containing no fewer than 383 signatures! Generally, signatures of each Oscar® winning Actor & Actress, and Supporting Actor & Actress (and often still others) appear with their year's awards ceremony.

Lot 10 Academy Award® presented to Richard Day for Best Art Direction at the 8th Academy Awards® in 1936. Art Director Richard Day was nominated for 20 Academy Awards® from 1930 to 1970 and won seven, including for his work on "The Dark Angel", “A Streetcar Named Desire” in 1951 and “On the Waterfront” in 1954. The figure and film reel, composed of gold-plated britannium measures approximately 10 inches tall and the total height is 11.75 inches. The pedestal's diameter measures 5.25 inches. The Oscar® statuette award weighs 8 pounds, 2 ounces. There is some tarnishing, mainly to the leg areas. Overall VG-EX/EX condition. Provenance: Formerly the personal collection of Robert Osborne, then by descent through family of Mr. Osborne.

Lot 11 Presented here for auction is Robert Osborne's personal copy of his 1979 book, titled “50 Golden Years of Oscar: The Official History of the Academy of Motion Picture Arts and Sciences,” hardcover, with dust jacket. It contains a special presentation page in front reading "Personal Copy for Robert Osborne". Published by ECE in association with the Academy®, and containing 294 non-paginated pages. Measures 11.75" x 9.75" x 1.25". Mr. Osborne's passion, enthusiasm and appreciation of film and it's stars is shown within this one-of-a-kind book containing no fewer than 383 signatures! When possible, he would have the Oscar® winning Actor and Actress, and Supporting Actor and Actress (and often still other award winners) sign the pages of their featured chapter. For other chapters Mr. Osborne gathered signatures of Oscar® nominees in every role of film making, presumably carrying this book to countless events.

Most interior pages are in EX/EX+ condition with some markings or small stains along fore edge, head and tail. Autographs grade Near Mint/Mint to Gem Mint condition—on pages that rarely saw the light of day. Due to its prolific event attendance, the hardcover book has wear at corners of covers and at edges of spine. The clear, mylar-covered dust jacket has wear and light creases, mainly at top portion of the cover. Notable names in this incredible collection of signatures include those listed above, and several hundred more (complete list is available by request). Only the Frank Sinatra signature has been deemed a secretarial variation. Includes full Letter of Authenticity from Beckett Authentication Services. Provenance: Formerly the personal collection of Robert Osborne, then by descent through family of Mr. Osborne.

Lot 20 1949 Pride of the Yankees 3-Sheet Movie Poster (41 in. x 81 in). Just recently discovered in the personal collection of Robert Osborne is this original 1949 Pride of the Yankees 3-sheet movie poster. This "never-used" movie poster was found stored folded (as issued) and does not appear to have been unfolded and exposed to the light more than once or twice. Condition wise this poster may be considered the best example extant and is bright, supple and clean with astonishing colors. In two sheets as issued, measures 81 in. x 41 in. total. However, laid flat without pressing on folds sits at 80.25 in. x 40.5 in. There are three or four small splits and some small creases at the fold lines. The small splits measure only .25 in. There is a tiny tear at base of poster measuring only .125 in. Overall Excellent condition (C8) per movie poster grading and condition reference used. Provenance: Formerly the personal collection of Robert Osborne, then by descent through family of Mr. Osborne.

Base of above Oscar® 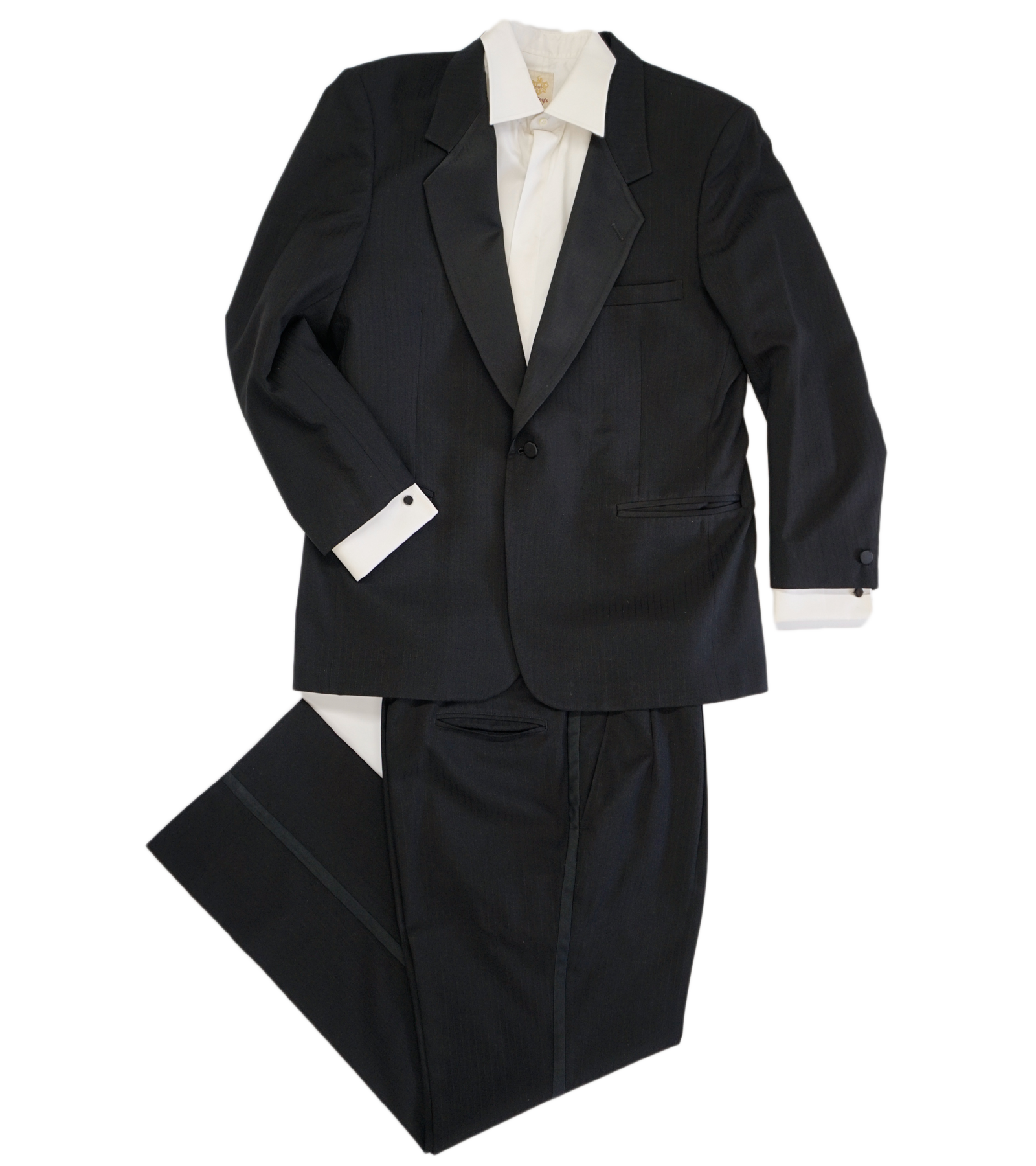 Lot 12 Robert Osborne Pierre Cardin Couture tuxedo. Shows wear and contained note stating it was worn to events in 2009. Provenance: Formerly the personal collection of Robert Osborne, then by descent through family of Mr. Osborne. 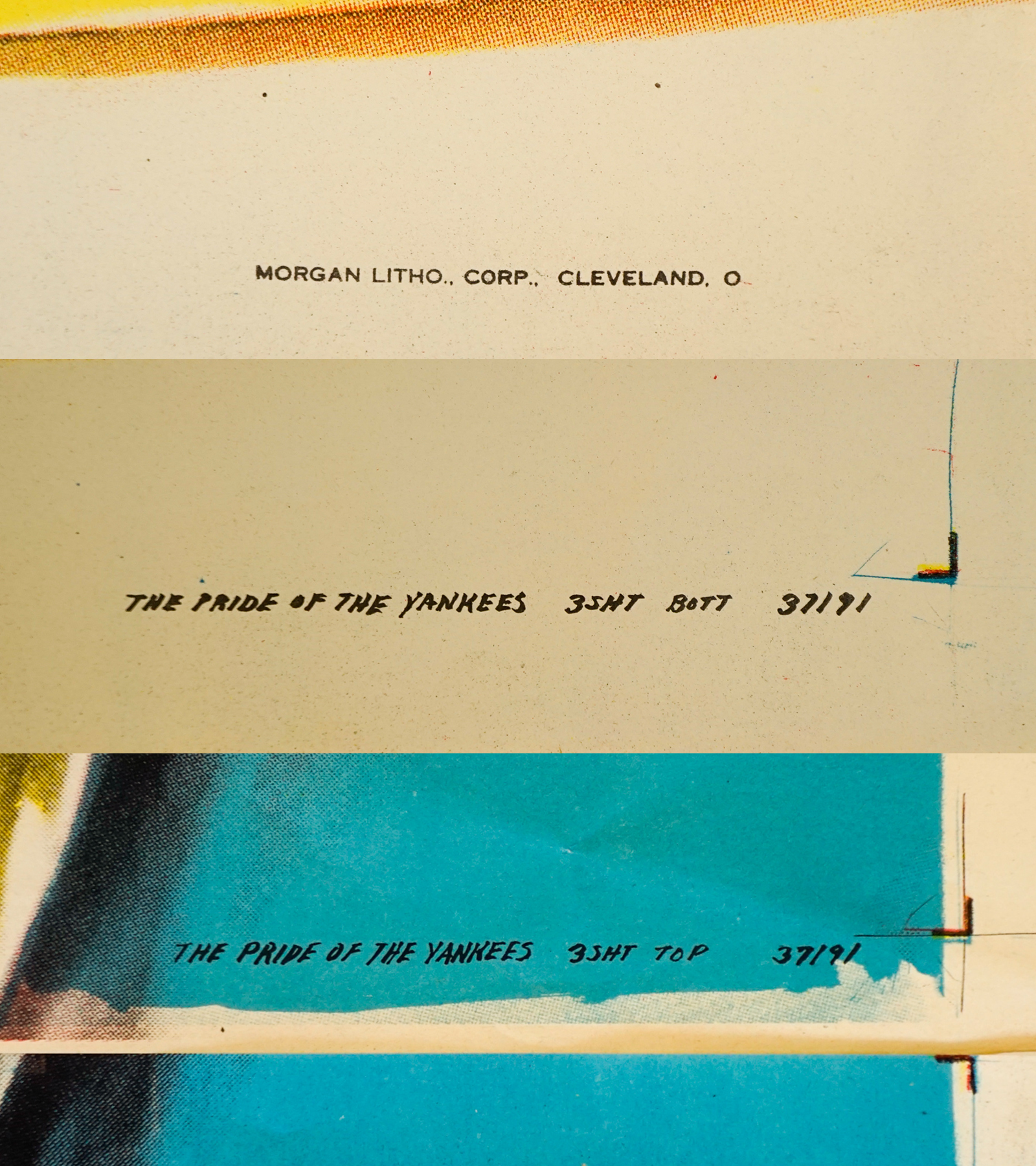 Robert Osborne, recognized as the leading authority on all things Hollywood, was born on May 3, 1932, in Colfax, Washington, a small farming community in southeastern Washington state. His parents were Robert Eugene Osborne, a public-school teacher, and Hazel Ida Osborne. He had one sibling, an older sister Joan. As a young person growing up in a small town, Robert enjoyed going to the movies and eventually worked at both of the local movie houses, the Rose and the Roxy.

Following high school (in Everett, Washington), Robert attended the University of Washington in Seattle. While there, his Saturdays were not spent drinking or partying, but rather at the library. He would research every issue of The New York Times, taking notes on what was playing at first-run theaters in New York, how long a film played at Radio City Music Hall, and who was in its cast. This hobby was the foundation for what would become an illustrious career in Hollywood. Robert graduated from the University of Washington’s School of Journalism in 1954, then spent two years in the US Air Force in Seattle.

After that, he moved to Los Angeles, with hopes of becoming an actor. His first job was working for Lucille Ball and Desi Arnaz at Desilu Studios. Robert and Lucille Ball became good friends, and it was she who encouraged him to blend his interest in classic films, his knowledge of Hollywood history, and his training in journalism, to pursue writing rather than acting. Osborne said his friend and mentor was correct in her advice, “especially after she saw me act.”

In 1977, Osborne wrote the book Academy Awards Illustrated. Also, that year he joined The Hollywood Reporter. In 1983 he started writing the daily column “The Rambling Reporter.” He continued the column featuring movie and Broadway play reviews until leaving the publication in 2009.

While working as a host for The Movie Channel, Osborne received an offer from AMC execs Brad Siegel and Jim Wise to host the afternoon America Movie Classic hosting slot when his Movie Channel contract expired. But, when Ted Turner established Turner Classic Movies in competition with American Movie Classics, he contacted Osborne and asked him to be a part of the new network. When TCM debuted on April 14, 1994, Osborne was on the air to introduce its first film, the classic Gone With the Wind. A constant and entertaining presence to his many fans, Osborne exhibited an encyclopedic knowledge of film history and trivia that greatly enhanced the film-viewing experience.

Osborne was considered the face of TCM, even after he was joined by two additional hosts and started cutting back on broadcast duties in his last few years. TCM remained his “home,” and once a month he would fly from New York to Atlanta to film his segments.

Since 2006 he was also the official Red Carpet greeter at the annual Academy Awards® ceremony. Starting in 2005, he also hosted the annual Robert Osborne’s Classic Film Festival in Athens, Georgia. He was well loved by Hollywood and gained the respect of such cinematic legends as Lucille Ball, Olivia de Havilland, Robert Mitchum, Jane Russell, Mickey Rooney and Angela Lansbury. Director Steven Spielberg said of him, “He got us excited and reawakened us to the greatest stories ever told with the most charismatic stars in the world. I will miss all the backstage stories he told us before and after the films. He sure opened my eyes to all that has come before and put TCM solidly on the map while ensuring his own legacy as the man who brought us back to the movies.”

No matter how busy he became, his ties to Washington and family remained very important to Robert. His family remembers with fondness how he would return as often as he could to his Washington home for family reunions. He further strengthened his connections to Washington when he invested in the Rose Theater and Rosebud Cinema in Port Townsend.

On March 6, 2017, Robert Osborne’s exemplary life and star-studded career came to an end when he died, at age 84. His sister’s three daughters, Sandy, Cheryl, and Jeni, inherited the bulk of his incredible personal collection of Hollywood memorabilia. They have said, “The sheer volume of his personal collection is far too large to keep to ourselves. This collection needs to be shared with all of the people that loved him and his work.” They are auctioning a portion of his lifetime Hollywood collection through Grant Zahajko Auctions in Davenport, Washington. Movie fans the world over will be able to bid through a variety of methods, including in person at the gallery, live online or by phone.

The many people who admired Robert Osborne and his work will not soon forget his authoritative commentary, urbane presence, and calm voice at the beginning of their favorite classic films saying, “Hi, I’m Robert Osborne.” Now they have the opportunity to relive highlights of his remarkable career through the auction of a unique archive of memorabilia and photographs amassed over half a century.

Honorary doctorate from the Academy of Art University in 2005

Star on the Hollywood Walk of Fame in 2006

National Board of Review's William K. Everson Award in 2007

The Academy of Motion Picture Arts and Sciences honored Osborne by including him in their In Memoriam montage during the Oscars® telecast.

In March 2018, Turner Classic Movies announced the establishment of the Robert Osborne Award, to be presented at the annual TCM Classic Film Festival "to an individual whose work has helped keep the cultural heritage of classic films alive and thriving for generations to come." The inaugural recipient was film director Martin Scorsese for his work with The Film Foundation, which Scorsese helped establish in 1990.